With a strong background in engineering, many Kyutech students are interested in manufacturing and craftsmanship. A variety of engineering projects are offered outside of the classroom. Some students participate in technology contests, others work on projects about ecology, others may devote themselves to building regional communities. Through these activities students not only acquire engineering knowledge, but also good communication skills while learning how to practically apply their knowledge.

Satellites are developed by students to perform experiments in space.

HORYU project is carried out over several years to ensure continuity in the learning process, masters students transmit their knowledge and know-how to bachelors students every day. 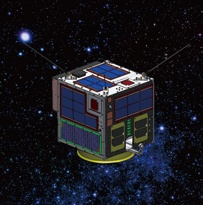 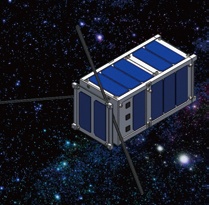 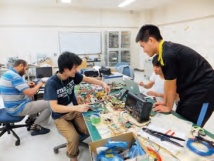 Kyutech students plan, design, and produce a small race car with the goal of winning the Student Formula Japan Competition. They hope to develop skills for manufacturing or "MONO-ZUKURI (object creation)", which in turn contributes to the expansion of the Japanese automotive industry.

The team is expected not only to achieve traveling performance, but also consider total “production” from the concept of the car to its cost.

They have finished in the 9th position and won the chairman's award from the Japan Automobile Manufacturers Association for four consecutive years.

In addition to car production, the Kyutech team works on recruiting sponsors, financial planning, marketing, and advertising, all of which provide great experience for their future employment.

In 2012, the year following the Great East Japan Earth Quake, RoDEP, a club based on the Iizuka campus, was founded for creating robots.

When the project began, the university did not have a dedicated room and the team leader's apartment was the workshop. But even under such difficult circumstances, they succeeded in attending the Rescue Robot League of Robocup.

In the competition a robot is required to report damage conditions in a simulated disaster field. The more accurate the information they give, the higher they score. They finished fourth for two consecutive years. The team was established in 2009. The students converted a broken-down old car
into a brand new electric powered car, by removing the engine and fuel tanks and then
replacing them with batteries and motors.

The converted car started running in Iizuka campus in 2011. Then, they passed the legal car inspection and hit the public roads in 2012. In 2012 and 2014, they attended the Shikoku EV rally and won first prize in the lead-acid battery category both years.

Now they are developing an EV three-wheeler and automatic driving.