On July 7, 2022, the degree conferment ceremony was held at Suranaree Institute of Technology (SUT) in Thailand, and Prof. Hirofumi Tanaka (Director of Neuromorphic AI Hardware Research Center of Kyutech) received Honorary Doctorate of Science (Applied Physics) from Her Royal Highness Princess Maha Chakri Sirindhorn in person. SUT is the public autonomous university under the supervision of the Royal Thai Government, and has concluded the agreement of academic exchange with Graduate School of Lice Science and Systems Engineering of Kyutech since 2019.

The degree was conferred for Prof. Tanaka's contribution for the creation and promotion of a new research field through the fusion of materials science and information engineering, and his effort on the academic exchange between SUT and Kyutech.

In commemoration of the conferral of the degree, there was an opportunity of the photo session with the Princess, the first President of SUT (former Minister of Education), the current President of SUT, and the Dean of the College of Science, and Prof. Tanaka expressed his gratitude for the degree and stated that he would like to strengthen collaboration between SUT and Kyutech while exchanging a few words with the Princess.

The ceremony was broadcasted in a nationwide news in Thailand.
Click here to watch the video(YouTube)
*The ceremony starts around 1 minute later. 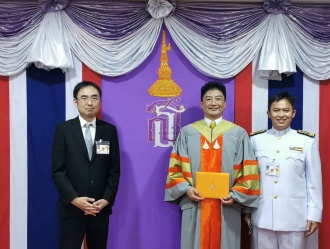 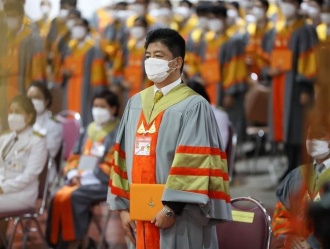 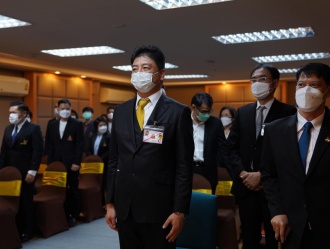