Kyutech as world No. 1 for the fourth consecutive year in university small satellite deployments

A space industry observer has renewed its report about academic operators of small satellites.

"Bryce Space and Technology" is a company based in northern Virginia in the United States and is partially funded by NASA. It released “Smallsats by the Numbers 2022” where it declared that Kyutech is the No. 1 academic operator of small satellites. This company issues the edition of the same report every year and Kyutech came out on top for the 4th consecutive year from 2018. Kyutech, along with Technical University of Berlin, are now further ahead of its competitors and now trailed by Boston University, San Jose State University, University of Colorado and a long list of others.

In 2022, Kyutech will launch 6 small satellites, named KITSUNE, BIRDS-5(3 units) , FUTABA and MITSUBA. Therefore, by the end of 2022, it is expected that the small satellite launch tally for Kyutech will reach 25 . This figure will probably be reflected in the next edition of the smallsat report published by Bryce.

"Smallsats by the Numbers 2022" can be viewed here: 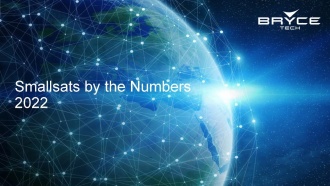 Smallsats by the Numbers 2022 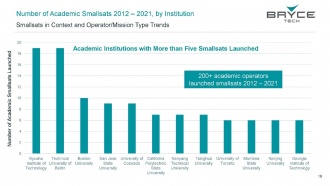 The number of smallsats operated by academic institutions