On 21st November, Dr. Yuji OIE, the President of Kyutech received the National Order of Merit “José Falcon” from H.E. Dr. Euclides ACEVEDO CANDIA, Minister of Foreign Affairs of the Republic of Paraguay who were visiting Japan.

The Merit was awarded for Kyutech's contribution for the success of Paraguay’s first satellite named “GuaraniSat-1” which was developed by Paraguayan international students participating the “Joint Global Multi-Nations BIRDS Satellite Project (BIRDS-4)" at the Graduate School of Engineering of Kyutech; and was deployed from the International Space Station (ISS) Japanese Experiment Module “Kibo” in March this year supported by Japan Aerospace Exploration Agency (JAXA).

In his acceptance remarks, Dr. Yuji OIE expressed his respect and sincere gratitude to the Republic of Paraguay, Agencia Espacial del Paraguay (AEP), and JAXA for their support for the project and acknowledgement of this Merit. He also stated that Kyutech would like to make further commitment to enhance Japan-Paraguay partnership development through not only the area of Space Engineering but also various areas of science and technology. 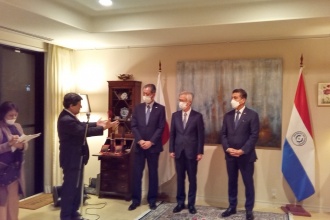 Awarding remarks by the Minister ACEVEDO 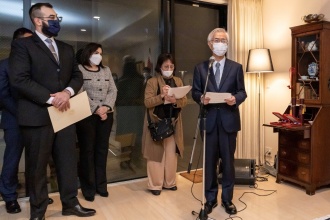 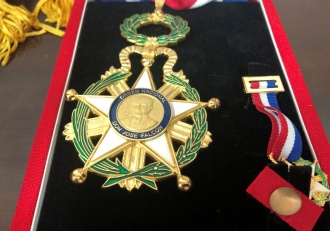 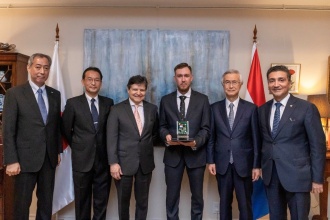 Mr. Adolfo gives the photo of Paraguay taken from the BIRDS-4 cube satellite to the Minister ACEVEDO