At RoboCup@Home league, the abilities and performance of service robots are evaluated in their interaction and co-working with humans at various living spaces such as home and offices. The 2020 competitions were cancelled, but in 2021, the competitions were held mainly by demonstrations using simulator.

The competition featured 2 tests for service robots to complete assigned tasks; “Clean Up” test to clean up a room; and “Go and Get It” test to get and bring objects requested by operator. For these tasks, the robots need to be equipped with high level of artificial intelligence which enables them to recognize situations around, plan their actions and implement them autonomously. In line with the rapid growth of artificial intelligence, RoboCup@Home league has become the largest league and attracts attentions from enterprises. In the competitions, the robots of Toyota and SoftBank are provided as the standard platform, and for the DSPL competition, the Toyota Human Support Robot (HSR) is used as official robot model.

Hibikino-Musashi@Home is one of Kyutech’s Student Project teams which consists mainly of the students from Graduate School of Life Science and Systems Engineering, supervised by Prof. Dr. Hakaru Tamukoh. In spite of the restricted activities due to COVID-19, the team members came together as one and overcame the difficulties with various ideas such as remote development. They integrated their deep learning and other robot technologies developed by actual machine testing into simulator for joining the competition. The team came in second but by a narrow margin, which showed their ability and achievements of the world highest level. Toyota HSR on Clean Up tasks 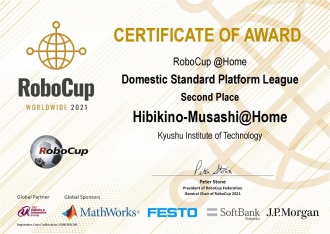 RoboCup @Home Best Go, Get It! In DSPL