On November 12th, 44 Kyutech International Students from 18 countries had a field trip to Yabakei, Oita and Chikujo Town with the purpose of enjoying the beauty of Japanese nature, especially autumn leaves, and its history and culture. On the way to Yabakei, all the students introduced themselves shortly and tried some quizzes about the places they visited on that day.

In Yabakei, they visited Yabakei Bridge which is called 'Holland Bridge' because of its structural style. They got the wonderful view of the 8-arch stone bridge over the Yamakuni River and met the guardian statue of frogs. After saying goodbye to the frogs, they walked to Ao-no-Domon, the hand-made tunnel which was the great accomplishment of the monk, Zenkai Osho.

The group moved to Keisekien Garden which expresses the beautiful natural environment of Yabakei with more than 30,000 trees and a small creek. Unfortunately, it was a bit too early for colored leaves, but they enjoyed taking photos and walking around in the garden.

At the end of the tour, they visited the Former Kurauchi Residence in Chikujo Town. After listening to the brief explanation by the guide, they looked around each room to find the differences in the style of 'Ranma' which is one of the traditional Japanese architecture. They also enjoyed the beautiful scenery of the garden through the windows from the different rooms. Some students borrowed 'Uchikake', women's kimono robe and 'Kabuto', men's armor helmet, and held poses for cameras.

Thanks to the beautiful weather, the students had a great time in all of those places they visited, and it became a memorable day for them. 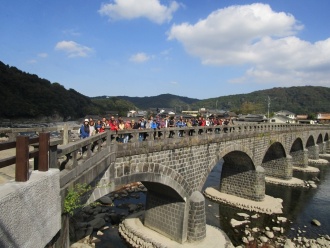 'Frogs', the guardian of the bridge Receiving the explanation about 'Ranma'