The 2U CubeSat SPATIUM-I has been successfully released from the ISS Japanese Kibo module on October 6, 2018 at 16:45 pm Japan time. The satellite was built in collaboration between Kyushu Institute of Technology (Kyutech) in Japan and Nanyang Technological University (NTU) in Singapore and launched to the ISS on September 23, 2018, from the Tanegashima Space Center on board the HIIB rocket. The satellite signal was confirmed at Kyutech ground station (GS) at 21:17, October 7, 2018 JST, and Kyutech GS is currently adjusting the equipment to demodulate the signal.

The satellite's main mission data consists of the counter value of 10MHz clocks, 1PPS signal and temperature. During nominal operation, the satellite repeats transmitting the mission data via SS-modulated 467 UHF radio for 2 minutes with 8 minutes interval. Moment of release from the ISS 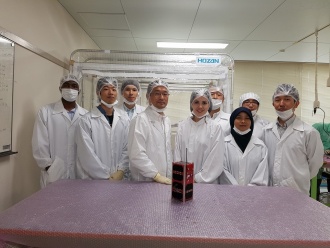 Team members of the project